When I was growing up the History Chanel was mostly aimed at dads with programming that centered on World War II and the military strategy. But somewhere in the early 2000’s that programming started to change. The shows became this strange combination of UFO’s, Bigfoot sightings, and survivalist choices. They seemed to be targeting not just elderly grampas and retirees but conspiracy theorists. In a Venn diagram I think you would see some cross over between people that watch the History Chanel and people that quote Alex Jones ironically.  Thankfully, I do not belong to that latter camp. I’m just your average harmless weirdo that wants to watch George Tsoukalas talk about crystals.

But recently I’ve noticed more channels that used to be focused on bringing you academic facts and scholarly accounts, just throwing that all aside to showcase white men jabbing on about how aliens helped the Incas build the pyramid (which is racist btw). Even more recently, The History Channel is going into scripted TV.

OK bitch. I see you.

This move is probably motivated in part for our love of wildly speculated conspiracy theories and our incessant need for DRAMA.  Finally the TV Gods have answered our prayers for a hybrid child of Ancient Aliens and How to Get Away with Murder!

I’m really looking forward to watching this show.  The life and story of J. Allen Hynek is one that is begging to be serialized in film format. His life as scientist hired to work for the government to investigate unexplained phenomena and then to become one of the world’s most prominent Ufologists is incredible. He was Fox Mulder, before Fox Mulder existed.

Will you be checking out Project Blue Book? 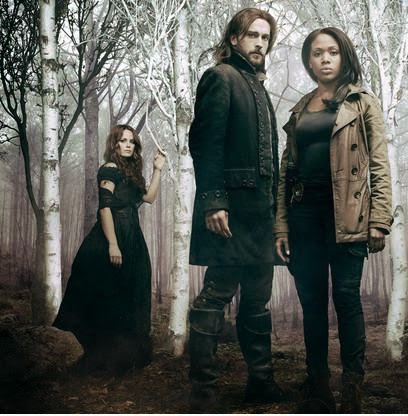 So lets begin with some vocabulary

Sleepy Hollow is a show on Fox that centers around the lives of certain inhabitants in Washington Irving’s fictional town of Sleepy Hollow. In this version, the town is terrorized by the Horsemen of the Apocalypse raised by colonials during the war for independence. One of those colonialist is the famous Ichabod Crane [played by Tom Mison] who has been put to sleep a la Rip Van Winkle and wakes up in the modern times, he teams up with police officer Abbie Mills [played by Nicole Beharie] and fights the forces of evil.
For fans of fantasy shows like Buffy, Supernatural, and Firefly it has a reminiscent appeal; think smart, handsome leading male with a quirky and tough female lead as well as a mix of romance, humor and drama. The show is also notably remarkable for its presence of a black female lead, even though it seems to be a very trendy thing right now with the overwhelming success of shows like Scandal and How to Get Away with Murder. The show, for all intensive purposes, is the first show I’ve ever seen with a black female lead and a white guy playing the side man. Ichabod is the comic relief, he shows up in his anachronistic, curmudgeonly way and rants about the modern banking system or the presence of Starbucks on every corner. Abbie is the lead character who goes through a myriad of emotional changes and challenges, both personally and also dealing with her relationship with her sister, but most interestingly with Ichabod. From day 1 the potential for a romantic relationship was established. These two are like two star crossed lovers who found each other through time to be together [poetic I know]. Their relationship even has a name: Ichabie (Ichabod + Abbie), thoroughly shipped by nearly everyone on twitter and tumblr. But there is one hitch [SPOILER ALERT], Ichabod is married, to a woman who also has managed to escape to our time. Ichabod’s wife Katrina is a witch who, somehow, always needs saving and puts Ichabod in some sort of emotional distress only to be soothed by his “Leftenant” Abbie. Its like watching two friends who are perfect for each other, deal with a high maintenance girlfriend. Katrina is not very popular online, whenever she makes an appearance on TV twitter lights up with calls for her to just die already [for clarification, the character to die, not the actress. I’m sure she’s lovely].
The popular OTP with everyone is Ichabod and Abbie hands down, but what’s more interesting is how many of those wishing Katrina death, are black women. The remarks are not so much angry or threatening but more of complete annoyance with this characters presence. Perhaps there is a hint of projection with these women, possibly wishing they could be in an interracial relationship and project their feelings onto Abbie, seeing another black woman in that situation it might pull some to identify with her and feel as though they know what she needs or wants. Katrina represents the eternal cunt block, that girl who holds your love interests attention despite not knowing exactly why she is so appealing. On one hand I am amazed at the response to her character even at the mere mention of her name but I too count myself as one of those people who desperately wish to get her off the show.
But lets think about this from the show creators side, how many shows have you seen that go downhill as soon as the leads cement their relationship? “Jumping the Shark” as its called happens most often when characters get together too soon and people stop watching because they have reached a sort of romantic catharsis. Already in the show there have been hints that everything is not alright in the Crane household and that Ichabod and Abbie’s relationship is borderline canon but I feel any move toward them being together would ruin the tension that we all come back to be tormented with.
Katrina’s character is unfortunately a tool, she is used to deny us what we want and create drama and obstacles for the characters, she’s completely in the way and useless, also she’s become increasingly annoying but she has to stay. For the shows sake.
But for right now my OTP’s ship sails strong into the safe harbor that is television canon.
November 10, 2014 0